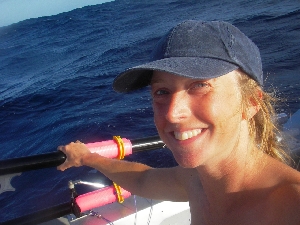 I get knocked down, but I get up again, ain't never going to keep me down...

This is no way to treat a fare-paying passenger. Early night, sleeping tight, suddenly the world turns upside down and I find myself head-down in a box of freeze-dried food. The indignity of it.

It was a bit of a surprise. One moment I was asleep, being rocked (relatively) gently By the waves. The next moment it's like I'm in a washing machine - everything is spinning and there's water pouring in through the ventilation hatch.

My lovely comfy bunk, which I'd managed to keep remarkably dry and salt-free, was dry and salt-free no longer. Sleeping bag, pillow and blanket were all sopping. After restoring some kind of order inside the cabin and on deck, I spent the rest of the night curled up into a small damp bundle of anxiety, flinching at every big wave and bracing myself for another roll.

Today, as if to make amends, Mother Nature sent me perfect conditions for an enjoyable afternoon's rowing - and I mean genuinely enjoyable, not just enjoyable compared with working in an office/ being held captive in Beirut for four years/ having my fingernails pulled out with red hot tweezers.

The sun was shining, the waves were rolling, and Tiny, I found that sweet water. And ah, was it sweet!

Happy Birthday, Nick Jones. Enjoy a pint for me.

Thanks for today's texts, many expressing commiserations on last night's event. Hello John T, HSS (your jokes are awful - love them!), DB, Clarkie, Philip Goodier, Y (I did get your birthday message - thanks!), AJ (Caie's barge - seems a lifetime ago! Can you remind me of your name?), Mark R.

Someone asked me what would be my first meal on arrival in Antigua. Ideally, a large rum cocktail as an aperitif, then a buffet of salads (avocado with buffalo mozzarella and cherry tomatoes, rocket with parmesan and pine nuts, marinated peppers and aubergine, with an assortment of dressings - pesto, lemon and coriander, spicy tomato). Then, as the main event, a platter of lobster, served with lime and hot melted butter, crab claws, jumbo shrimp and barbecued monkfish, all washed down with a glass or three of Chablis or a crisp South African Chenin Blanc. Then, if I had any room left, strawberry shortbread, followed by a caffe latte and three chocolate truffles, one white, one milk and one dark.

Not that I've given it a moment's thought, obviously.

Rita Savage's PS:
People have expressed concern for me, knowing that I will be worried about Roz out there in the Atlantic. I know that I am not the only anxious mother - and other family members and friends - whose thoughts are very much with those taking part in the Atlantic Rowing Race. I suppose I am a bit different as Roz is the only female solo rower. I was fortunate in that I was able to spend several weeks with Roz when the boat was being prepared in the boatyard, as well as at La Gomera. She had me crawling all over the boat with epoxy resin, screwdrivers and paintbrushes. I checked, packed and re-packed her first aid kit. I counted out packages of different types of food into weekly packs; experimented with the stove to assess the amount of fuel needed; went shopping in La Gomera for spare fuses, Velcro, Milton, hand-held water pumps, without being able to speak a word of Spanish. There was not much that I did not know about the boat and its contents, apart from the electronic gadgetry. All of this has helped me to have confidence that Roz has prepared very carefully to cover every aspect of the voyage. There have been some disappointments when people on whom she was relying for shore management, weather forecasting and finance have let her down. Roz and I are both most grateful to so many others who support us with their words, their messages and their prayers.

At last - some sunshine this evening.

On a day when Polyanna would have been challenged to find something to be glad about - driving rain, the wind blowing me north, discovery that my one change of 'normal' clothes for Antigua has gone mouldy - I've found one particular mental trick very helpful.

I've been enjoying a correspondence with two other solo ocean adventurers - Leven Brown, who is rowing the Columbus route from Cadiz to Jamaica, and Adrian Flanagan, who is sailing around the world via the polar regions. They both gave me the same advice - the value of retrospect.

Leven: ' Remember when the going is tough to treat it like a bad dream and focus on the
welcome your are going to get in Antigua.'

Adrian: ' When you come to look back on it,
the voyage will seem to have been over very quickly. Remember, it doesn't have to be fun to be fun. And it will have been fun once you are among the elite few who have single-handedly rowed an ocean.'

This 'time-travelling' approach has really helped. I had a great time preparing for the row. I'll have a great time afterwards basking in the glow of achievement. And if the bit in the middle is sometimes hard going and a bit yucky, well that's not such a bad deal.


Thanks for the texts: Mac from Team Sevenoaks (good luck with your race preparations - happy to offer advice when I get back), HSS (relieved to hear the pink hard thing was a pig with a flick knife, am not even going to repeat the next part of the joke!), Boris, Mark Reid, Tiny (thx for advice and encouragement - know what you mean about that sweet water, but today that would have taken me north), Sam K (support much appreciated), Guy, John, DB (not feeling photogenic today!).

HIT BY A FREAK WAVE! Message from Rita Savage 9pm (GMT). Roz has just phoned me to report that she thinks she has been hit by a freak wave, and that the boat had rolled a considerable way. She does not think that it rolled the whole way over and back again. She was asleep, tired out, and the waves had not been all that rough. She awoke with water pouring onto her face from the overhead hatch; her feet were in the plastic crate in which she keeps a week's ration of food in the cabin. Other items had been thrown around inside. Out on deck a few items that were not tied down have gone: her comfy cushion for sitting on deck, a drinks bottle and a few eating utensils. The oars are still there, and some other items, but she was not going to go out to investigate.
At the end of the phone call she was going to go back to her wet bed to get some more sleep. She was understandably rather shaken and felt she had to talk about it to someone who would be sympathetic. In the light of what she has written in the dispatch tonight, this was not exactly what one would call fun!