At the time of the breakages all oars were stowed in the upper position. Must have been some big mean wave.

Apologies for being offline for a couple of days. My palmtop was on non-speakers with my satphone, probably due to water somewhere in the data cable. There's water everywhere else, so it's likely it was in the data cable too. Fortunately it seems to have recovered now.

Life has been interesting since I last wrote - rough and wet mostly - which may appeal to some tastes but not especially mine. I need to have words with the race organisers. I thought I'd signed up for Atlantic Lite - the sort of Atlantic Rowing Race where people talked about 'Lake Atlantic', enjoyed silence and serenity, and sipped G&T's at sunset. Instead I seem to have got Atlantic Hardcore - 20 foot waves, capsizes and broken oars.

When I told my mother about the latest casualties she commented, 'The ocean is really stripping you down, isn't it?'. And this is true, metaphorically as well as literally. As I'm left with less and less, it makes me realise how little I actually need, how little is actually important. Everything happens for a reason. So there must be lessons I am meant to learn from this that I couldn't have learned from Atlantic Lite. 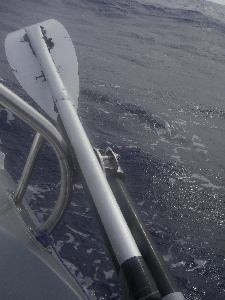 I'm amazed and rather indignant about the two broken spoons. These oars were properly stowed alongside the guardrail oars, i.e. with the spoons 4ft clear of the water, and supposedly protected by the guardrail spoons - yet one broke clean off and the other nearly so. For this sort of pressure to be exerted, 4ft above the waterline, on both sides of the boat... That must have been some knockdown.

And an injury:
Wrenched shoulder during a knockdown while at the oars. Back on the Ibuprofen.

In answer to all enquiries, Monty is absolutely fine, thank you, but is very pleased that he has his lifejacket.

Natalie: thanks for the vibes - keep them coming. In answer to your question, the weight is coming off, but probably due more to boredom with food rather than roaring metabolism. Estimate I am eating 2000-3000 calories on a typical day - about the same as pre-race, but now losing weight rather than gaining. Brown fat? Not sure how to tell, but I doubt it. Plenty enough food to see me through, but shortage of food that appeals. That, alas, only dry land can offer.

Thanks for texts from Damian, H and Phoebe West, John T (macrame - been there, done that, got the string bag), Lizan (don't worry - I hope to complete the race AND stay safe), Luke Johnston (great to hear from you - this boat a bit smaller than the trireme, this ocean rougher than the Aegean, too bad no ouzo, also no lunatic Irish dentists on mopeds!), Tim Ratbag, Snowy (good suggestion, already considered, may yet resort to cutting broken oars to make sleeve but reluctant to be without guardrails as they've already saved my life more than once), Richard Latham, Imelda, Mark Reid, Clarkie, Natalie, Mike C, Adamski, Steve Maskell, Alex F, AJ, Guy.

It was easier to work in dry conditions: La Gomera, November.

Late Addition: Wed.morning: Roz managed to upload her dispatch for Day 47. This has now been added to her previous dispatch about Fundamentals at her request. Do read about what happened then.

Roz has had a day off from rowing today, not by choice but by necessity. She did not wish to miss doing her dispatch, but once again is prevented by non-functioning gadgetry. Following the rough waves of the last couple of days she is coping with a painful shoulder, broken oars and wet, wet, everything wet.
When daylight came this morning she went out onto the deck to see what damage had been done. In spite of carefully stowing her oars and lashing them together and to the boat, there was further damage. The spoon of one of the oars was lying on the deck, another one hanging on by a thread. She had already separated the boat hook into two parts to make splints for the oars. She now took one part, hammered it flat at one end, and has attempted to use it as a splint fastened to the spoon with Stikaflex (? spelling).
The instructions state that the surfaces must be clean and DRY. Ha ha. How do you dry something when everything you own is wet? She now has to wait until tomorrow to see if it holds. In spite of not being able to row at present, she has travelled about 27 miles today with the help of wind and waves. The weather forecast implies that the rough seas should moderate by the weekend. Let’s hope so! They all need a break out there.
Roz ‘ thoughts are very much with those who have lost their boats, but does rather envy Emily and Sarah on the tall ship Stavros S Niarchos. Quite an experience for them. When I mentioned that Jo Davies on Aurora was feeling so much better after a rest and a shower, Roz politely asked me not to mention that lovely word again.
Roz thanks all those who have sent messages, including Richard A, just sorry she can’t acknowledge them herself. As for her own feelings, she is so grateful that she is in a better frame of mind now than she was in the first month. What a girl!