A few pics from Gary and Amy's Bear Basin Ranch in beautiful Colorado....

Hats in the ranch house 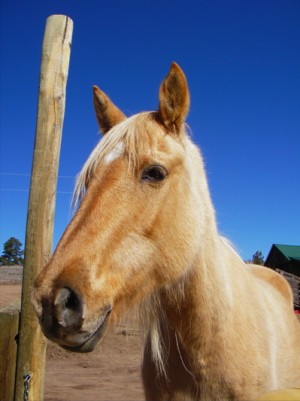 A palomino gets nosey

And the local equivalent of neighbourhood watch.

It was just around sunset when I rolled into Bear Basin Ranch last night. I would have been here sooner, but I'd taken a wrong turning at one point and ended up in a very picturesque canyon with sheer rock sides that brought to mind a phrase I'd read in a book recently - 'Geological time includes now' - which is an elegant way of saying 'Watch out for falling rocks'. The book was 'Between A Rock And A Hard Place' by Aron Ralston, who had to perform a self-amputation when a small boulder fell on him, trapping him by his arm. He had a choice between cutting the arm off or dying of thirst.

Anyway, I eventually arrived at my intended destination, all limbs intact, to stay with my friends Gary and Amy. Gary was the American co-leader on an Anglo-American expedition to Peru that I went on in 2003. We set out to find some specific Inca ruins near Machu Picchu, that had been discovered once before, but the location had been mis-mapped and they'd been lost again. You can read more about it from my Peru expedition blog.

Gary is 66 now, but still as twinkly and energetic as ever. He mixed me one of his legendary martinis and showed me around the ranch house, which was exactly as I'd imagined it should be - cowhide rugs on the floor, cowboy hats hanging from bull horns on the wall, no running water... Then the martini kicked in and I had to go sit in front of the woodburning stove while I recovered.

It's now a bright and sunny morning up here (elevation 9000 feet) and Amy is about to show me around the ranch. There was mention of getting me on horseback. Errr...