One step forwards, two steps back. After taking 8 months to get to mainland US, via assorted adventures including a boat-napping and lengthy meanderings around the Caribbean, my boat Sedna is still very far from making it to the West Coast.

The original plan was that I was going to collect her from Miami at the start of November (the objective of the aborted road trip) but she didn't even arrive there until late December. She then cost me $1000 in various charges, before being rescued by the two heroic brothers Josh and Daniel. She is now sitting in Daniel's front garden.

Then there was an exciting new development - the Museum of Science and Industry in Tampa wrote to say they wanted to exhibit her. I would whizz over there to do a presentation and some media stuff for them, my boat would be safe and secure pending me finding someone to drive her cross-country, and everybody would be happy.

But when MOSI were checking out the logistical details, they pointed out that in the US, unlike in the UK, some (but not all) trailers count as vehicles and have to be registered as such. If my boat and trailer were going to spend their entire lives in Oregon then I wouldn't have to register them because they are under the minimum weight. But because they are in Florida, I do.

To register the trailer I need a US driver's license and/or a social security number, and a certificate or registration document to prove I own the trailer.

I have none of these things. So I am temporarily stymied. I want to get Sedna safely to MOSI before I leave for Tanzania next week, but I need to get my bits of paper in order. The race is on...

I was up at five o'clock this morning to drive up to town for my maiden row on San Francisco Bay. It was dark and cold as Quackers and I headed up I-280 and through the slowly-wakening city to South End Rowing Club.

Paul greeted me at the door and showed me to our craft - a clinker-built wooden boat called Valhalla. We launched her off the end of the quay and set out at a brisk clip for the island of Alcatraz.

It was distinctly rough and chilly - the temperature round about freezing - but any potential grumbles died on my lips when I saw open-water swimmers ploughing along beside us, their pink-cold arms arcing up from the choppy waves. Brrrrr! No right to complain.

It wasn't a comfortable row. When I rowed the Atlantic I deliberately planned to have no overlap between the handles of my oars, not wanting to bash my hands together. This morning my arms were crossing over at the wrists - a BIG overlap - so soon my following hand was bleeding, I was punching myself in the ribs, and I kept catching crabs (getting the oar caught in the waves).

But, strangely, it was fun. It was a beautiful sunrise, and it felt good to be out on the open water rather than rowing on a machine. I'm not going to be back in the Bay Area for a couple of months, but I'm looking forward to spending more time out rowing with the SERC. 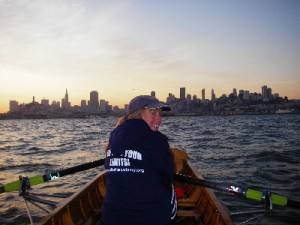