I'd been too busy of late to check on the progress of the Rames-Guyane solo rowing race from Senegal to French Guyana. But I checked it out this morning, and am delighted to see that Sophie Mace, the only woman, finished in fourth position. Well done, Sophie!

Of the fifteen starters, 7 attempts were abandoned, 2 competitors were unplaced, and 6 completed the course. Sophie finished on 7th January, after 50 days at sea and covering 2300 nautical miles. Compared with my 2550 in 103 days, this is awesome! She clearly rowed like a maniac, and/or had some great weather conditions.

Respect. All power to her elbow!

I've driven nearly 700 miles in the last 3 days in my new yellow truck, affectionately known as Quackers, and he's doing a great job. He's coped with temperatures down to minus 11 Fahrenheit (minus 24 Celsius), snow, ice, torrential rain, and bright sunshine. But - is he environmentally friendly?

Well, no. Not friendly. Not even relatively neutral like my much-loved VW campervan Priscilla, who ran on LPG. But in my defence, he's the best of a bad lot when it comes to American-available vehicles that are capable of towing a 1200lb rowboat.

Ideally, I would have bought a hybrid or a diesel that can run on biodiesel - but a hybrid was too expensive and biodiesel is not widely available - and American un-bio-diesel is not as clean as its European equivalent.

So I had to settle for the best miles-per-gallon I could find amongst 4x4 pickups. And the Ford Ranger was as good as it got - claimed to get 22mpg in the city and 26 mpg on the highway. According to my figures so far, I reckon Quackers has averaged just over 20mpg, which is not great but it's not too bad compared with many American gas-guzzlers.

So my conscience is prickling, but I did the best I could within the constraints of what I need to do and how much I can afford. Let's call it pragmatic environmentalism. The main thing to remember is that every little bit helps. If only everybody would be conscious and do their little bit to help (by using public transport rather than driving, or driving rather than flying, and choosing the most environmentally friendly car that fits their lifestyle, for example), all those little bits would add up into a very substantial global difference. 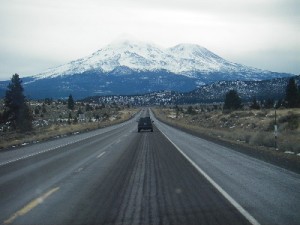 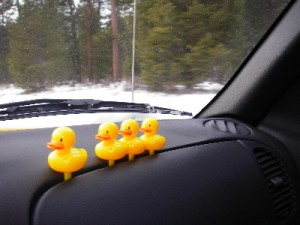 Getting all my ducks in a row...

And the happy driver.