My ocean rowing boat, Sedna Solo, seems to be having quite an adventure of her own. After months of problems and delays, she was due to arrive into Miami from Antigua last Friday. But somehow she's ended up in Trinidad instead.

She was on board the CC Grenadines, bound for Miami, but the last I heard, the Grenadines had stopped off in Trinidad and all the freight containers unloaded. Sedna is now due to be reloaded onto a different ship, the CGM Barbados, which will go to Jamaica and then, finally, to Miami.

So Sedna is due to finally arrive on the US mainland this weekend. But I've heard that one before. I'll believe it when I see it....

(And then she still has to somehow get across the US from Miami to San Francisco - there are a number of options at the moment, but nobody seems very willing to tell me how much each option is going to cost me, which is making it difficult to make any kind of decision.)

... makes us stronger, as Nietzsche said. A para-gliding accident didn't quite kill Fred Noble, but it was a close-run thing. Further to my blogs on how a split second can turn a person from able-bodied to disabled...

A couple of years ago, when Fred was 67, he had a serious fall while para-gliding in Brazil that forced his femur up into his pelvis, breaking it clean through the middle (which makes my little stress fracture look totally trivial).

Fred spent a full year in recovery, slowly and painfully restoring his body to health. For the early part of the year he was on intravenous morphine. The pain was so bad towards the end of each dosage period that he would be counting down the seconds until he could take his next morphine shot.

He had been an intrepid adventure heli-skiier, used to adrenaline rushes and wide open spaces. But now his perspective had changed. He recalls the day when he was able to put on his own sock - a major victory.

The road to recovery was long and hard, especially for someone no longer in the flush of youth. But eventually his perseverence through months of rehab paid off. He can now walk unaided, and is planning a heli-skiing trip to celebrate his 70th birthday next year.

There must have been many occasions when Fred wondered if he would ever walk again. But he took the big challenge and broke it down. One day trying to touch his toes. Then trying to put on a sock. Then rebuilding the strength in his legs. Little by little, he overcame probably the biggest challenge of his life.

Eric and I stayed with Fred in Portland last weekend, on our way back from Hawaii. We were talking about adventure and risk. Fred commented on how many people say, 'I could never do that', when what they really mean is 'I don't want to do that'. If they DID want to do something, they could find a way. They could come up with a plan, breaking the big challenge down into smaller chunks, or gradually acquiring the necessary skills and confidence, taking it one step at a time.

So often, our limits are the ones that we CHOOSE to impose on ourselves. 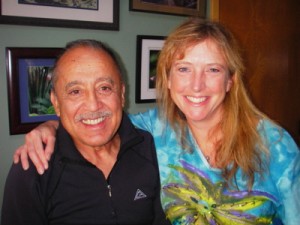