I work in the Contingent OPS Cell at Northwood and have been asked by Cdr Hussain to look at the support and routing (given my past experience as a navigator as well as a forecaster) for your rowing expedition. I have come up with what I believe to be a workable plan but there are some issues that will need to be addressed in due course, mainly taking into account your route with respect to weather conditions. The breakdown is as follows:

Part 1 - San Francisco to Honolulu
Distance 2080nm following the great circle route. Leaving in July will mean that you are mainly under the influence of the persisting East Pacific high pressure. Initially you will be affected by cross winds (from the north) as you head southwest from the coast but picking up north easterly wind about a quarter of the way into the route. Once you clear the California Current that runs southwards down the coast of California, the current will also become favourable. July of course is the middle of the Typhoon season in the East Pacific with the systems being spawned off the coast of Mexico and taking a generally west or northwest track which will affect your route. Your actual departure date would need to be dependent on the formation and track of these systems.

Part 2 - Honolulu to South Pacific
The end point I've looked at for this is the Tuvalu Islands (approx 6 South, 175 East). The main island here is Funafuti which also has an airport which will help logistically. The distance here is approx 2200nm. Leaving in March would be beneficial for this stage to take into account the north and south equatorial currents which both run westwards and as you proceed southwest you should meet the counter current (east setting) at its weakest. The north equatorial current and winds would be astern of you down to the equator and then on your port quarter (so still assisting) as you run down to the Islands.

Part 3 - South Pacific to Australia
Here there are more issues which may affect your ultimate destination. To head to Sydney is by far the longest route at 2400 - 2500nm. The main issue here is that the winds will become constantly on the port beam as you pass the Solomon Islands, becoming a head wind as you head down towards Sydney (virtually no change throughout the year). There are two further options, one of which would be to head for Brisbane (approx 2000nm) which would mean that you become affected by crosswinds as you pass the Solomon Islands, but would be spared the head winds if you headed to Sydney. The 3rd option which takes optimum advantage of weather conditions would be to head for Cairns on the North East Peninsular (approx 2100nm). This would mean that as you clear the Solomon Islands the wind would come more from the quarter than the beam so would be of some advantage.

The first two sections appear relatively straightforward, but further analysis will be needed to look at optimum timing but the dates given above look reasonable at this stage. The 3rd phase is obviously more complex and will require much deeper analysis coupled with your requirements for end point and when you wish to carry out the row.

If you have any questions please do not hesitate to get in touch.

That is very useful indeed - thank you for your time and effort in producing such a succinct and helpful analysis of the Pacific weather patterns along my intended route.

Re Part 1, I think I will set a provisional departure date of Sunday 8th July 2007, but will be prepared to be flexible if typhoons are developing. Will it really be best to attempt a great circle route, or would I be better off trying to slingshot the East Pacific High?

Re Part 2, good to know the likely optimal time to leave. This gives me a shorter-than-planned break between Part 1 and Part 2, but well worth it for the favourable conditions. Tuvalu sounds a sensible target.

Re Part 3, ocean rowing boats cannot go into a headwind. A beam wind is difficult, but a headwind is impossible. So we can write Sydney off as a potential destination. Cairns sounds like a much better bet. What time of year would be optimal for that route?

With thanks and best wishes
Roz

Roz has asked me to explain to you about the Google Earth Button (this is a picture, the real one is up on the right). It was something that puzzled me in August, when I first started helping with the website, and it continued to do so until a few days ago. I was checking the new website layout and clicked on this little button on the right. Nothing happened! I tried again, still nothing. So I moved on and later asked Roz about it. She told me I needed to get Google Earth.

Now Google Earth is quite amazing. I put in "Woodside, CA" where Roz was at that time and it zoomed in to an area which looks to have lots of houses in a wooded area. I put in my home address and it zoomed in so close, I could see that my car was not parked outside when the photograph was taken. And when Roz set off on a mini-road trip in September I "followed" her route and "flew" to Guerneville.

Take a look and you will see a picture of the earth with the positions of Roz's blogs marked on it. You can zoom in and see exactly where she was when she wrote the blog, so you can see her exact route across the Atlantic. If you click on a position you can read the blog, or you can click on a blog in the "Places" window and it will point to her position, and you can zoom in and see as much detail as you want (well almost). For example, the picture below shows Days 16 to 22 on the Atlantic, you will see she made almost no progress, being blown North for several days and then having to spend another day to get back to where she started. I have drawn a line to show you her route. 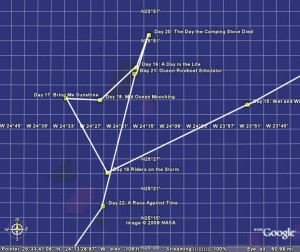 If you haven't already got Google Earth, then I thoroughly recommend you do, although you need a reasonably fast computer and a good graphics card. You can click here to see a picture of Roz's Atlantic route, or click the Google Earth button to get the full view. You could also try "flying to Guerneville" as I did. But be warned - it is all rather addictive!