Roz produced this calendar after her expedition to Peru in 2003, and it was initially intended to be the forerunner of the book about her adventures there. But before finding a publisher for the Peru book, her time and energies were overtaken by other plans resulting in her participation in the Atlantic Rowing Race 2005.

The calendar has stunning photos of this most photogenic of subjects - the people and places of Peru. A perpetual calendar, it is suitable for recording birthdays and anniversaries as the days do not have the dates attached to them. Or one can write in the days of the week and use as a conventional calendar.

Or if you have problems with ordering through eBay, you can pay Roz through her website using PayPal, Fill in your name, postal address and what the payment is for.

This information provided by Rita Savage.

FLOODING ABOVE 13.0 FEET...EXPECT THE RIVER TO GO OVER ITS BANKS IN A FEW LOCATIONS. FLOODING OF LOW-LYING PROPERTY AND ROADS ADJACENT TO THE RIVER IS LIKELY. STAY AWAY FROM RIVER BANKS THAT MAY BE ERODED AWAY BY THE HIGH AND FAST-FLOWING WATER.

Today the Hood River was 14.08 feet above its normal level. We watched, fascinated, as it disgorged a huge floating island of logs, sediment and debris into the Columbia River. Then we got a call from Moe: 'You guys have to come and see the White Salmon River - it's crazy!'

The river may have been crazy - a seething, frothing tumult of chocolate-brown water - but nowhere near as crazy as the guys who decided this kayaking opportunity was too good to miss. It looked unbelievably dangerous, but to them, it was irresistible.

They went flying past us as we stood on the bank. A run that normally takes around an hour took them just 6 minutes.

I can't wait to learn to kayak. 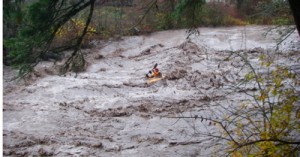