I will be offline and offshore for the next few days, sailing on a Tall Ship with 11 other women to raise money for the Tall Ships Education Academy.

I haven't been to sea since I arrived in Antigua over 7 months ago. It will be rather different this time around - bigger boat, bigger crew, and only 3 days compared with 103.

The picture at the top is how I last saw Sedna - all safely tucked up, free of charge, in Hugh Bailey's boatyard on Antigua. The picture at the bottom is apparently where she is now. It may not look too bad, but I am so very worried.

First, she was moved without my permission or knowledge. Second, she appears to be in an enclosed container. Why does this matter? Every time she has been moved before, it has been by crane, suspended by straps. She has been treated as delicate cargo, to preserve her fragile, lightweight hull. She has been carefully placed onto either a trailer or a custom-built cradle. Now she is sitting on a broken pallet.

Also, she is now in a container, which doesn't have an open top, she must have been pushed in there somehow, very possibly by forklift truck.

The photo seems to show some damage to her hull. Or it could be barnacles. I won't know for sure until I see her in Miami sometime around 8th November.

I have asked Steve to have the Kleenex handy, just in case... 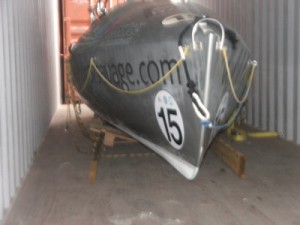