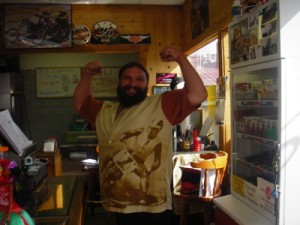 Something that really fascinates me about America is those real Nowheresville kind of places - where people just pass the time of day, teaching their dog a trick, chatting to the neighbours, waiting for something new to happen.

Yesterday I found one of those places. I was on the high plateau, just south of The Dalles, Oregon, and was running low on petrol. I kept hoping that over the next rise in the dry, brown landscape, there might be a gas station.

Long after the BlandsMobile had announced 'low fuel' and I was starting to panic about being stranded, I happened upon Grass Valley. Not as verdant as it sounds.

At first I thought the gas station was closed, but a burly attendant (Doyle - second top) ambled out to fill 'er up. There was a free 'magic' show into the bargain - a few tricks involving novel ways of folding a dollar bill, and an email pointing out various spooky permutations of the numbers 9/11.

On the way out, I got talking with Dale (top), the tattoo'ed, scarred guy working in the yard. He had a long scar across his face. 'Yeah... got mixed up in the wrong crowd.... fella tried to kill me....'

For half an hour, I was in a different world. Not somewhere I'd necessarily want to spend much longer, but I loved the insight into a different pace of life, a few different human histories.

I haven't been in a boat since I stepped ashore in Antigua, and I hadn't missed it. So when Arlene's tenant, Jim, invited me to go for a paddle in his sculling boat I was about to use my stress-fractured hip as a wimp-out option, when something (vanity?) made me say, 'Why not?'

And I loved it.

What's not to love, when your're surrounded by stunning scenery, hearing the bubbles run under your hull, soaking up the natural beauty of the Columbia Gorge. Gorge-ous!