Use 1: Atlantic Row Day 48 - my fourth and last oar broke. I wasn't even halfway across the ocean. I was determined to maintain my unsupported status so rather than calling for replacements, I had to make do and mend using only what I had on board - a telescopic boathook and duct tape. I used the boathook as a splint, and bound the whole thing tightly in duct tape. I would row with these cumbersome, patched-up oars for the next 1500 miles. [Illustrated above: note stylish silver duct tape on oars on both sides of the boat.]

Use 2: Duct Tape Wallet - if you should happen to find yourself in need of a wallet, and for some reason you don't have access to a wallet shop but you do have access to a duct tape shop, here's what to do.

Part 3: Duct Tape Case for your iPod Nano - no problem!

Hard to imagine the need arising, but you never know. Duct tape and cable ties - surely the most versatile DIY kit ever. 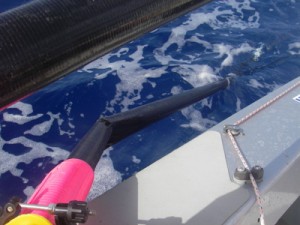 Oar before the repair

The Atlantic is 2935 miles across (although with all my meanderings I probably covered many more miles than that). That's the distance from New York to San Francisco. I've tried to find a comparable distance in Europe, but even London to Athens is only a measly 2112 miles. So try this one...

Look at your hand. If that hand is an average hand it will measure about 7.5 inches from wrist to fingertip. If that hand was my boat, the distance I rowed across the Atlantic would be the same as the distance from Oxford to Cambridge. Imagine 'walking' that distance (80 miles) by putting one hand wrist-to-fingertip in front of the other.

Kakadu Golf Gloves have just renewed their sponsorship with me. I wore out 5 pairs of their kangaroo skin gloves crossing 3000 miles of Atlantic, so will probably need 15 pairs to cover 9000 miles across the Pacific. That must be almost an entire kangaroo's-worth. And if you were 'hand-walking' from Oxford you'd probably be glad of them too.