The last time I drove up Highway 101 was in 1994, in a Mustang convertible with the roof down, my boyfriend (later my husband, now my ex) at the wheel, Depeche Mode on the stereo, the setting sun glaring through the haze over the mountains. We were on a 3-month break from work, and had just arrived in the US at the start of our trip around the world. We were full of excitement and nerves and wonderment at what the future might bring. Yesterday I drove up the same highway, alone, in a Mini Cooper. The circumstances may have been different, but the emotions were almost the same.

I was on the last leg of my journey from San Diego to San Francisco. I'd stopped off in Redondo Beach, LA, Santa Barbara and Santa Maria to see various people - friends, strangers, potential business partners. Everyone I saw had helpful words to offer for my Pacific row - and ideas for more people I ought to meet. It's that exciting stage of planning an expedition, when everything seems possible. Like in '94, I had that feeling of unlimited opportunity and potential. The future lies before me like a new diary, waiting to be filled with exciting news.

I am now esconced in 'Robert's Nook' - a small cottage in the woods in (appropriately named) Woodside, about 25 miles south of the centre of San Francisco. I will be based here for the next 6 or 7 weeks. This is the longest I have stayed in any one place since I left my rented cottage in Emsworth eleven months ago to go row the Atlantic. Already it feels like home. 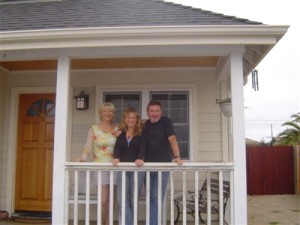 In Orcutt with Jill and Les - Les was manager of Guns 'n' Roses in a past life, now involved in the Historical Diving Society

P.S. I have just watched the video again, and I realised I don't look as excited as I claim to be. I actually AM excited, but am having to concentrate very hard on a) driving a stickshift car on the wrong side of the road, while b) filming myself, and ideally c) not crashing. To look excited as well would have been one multitask too many.

'It's a matter of survival.' I was talking on the phone with the head of major nonprofit organisation Conservation International about my forthcoming Pacific row. He was sounding earnest and concerned.

'Don't worry about me,' I said. 'I've already survived the Atlantic. I reckon I can survive the Pacific.'

'I meant the survival of the oceans,' he said.