I hate to see food go to waste. I want to lose weight. I am in America. These three facts present me with a moral dilemma. America just doesn't do small.

This is what I love and hate about America. I love it because it's larger than life. Americans like to think big. Why try to raise a mere $100,000 to row the Pacific? Why not aim for $1 million?

But I hate it too, because the same generosity of spirit and expansiveness of mind also lead to super-size everything. My bran and apple breakfast muffin yesterday in Vegas was as big as my head. [See above for head. See below for muffin. Spot the difference.] But it was so good I ate it all anyway.

Then I felt guilty and had to go to the gym to try and sweat it off. And thus compounded my greed (using up more than my share of the world's food resources) by using up its fuel resources too - using an electric treadmill in an air-conditioned gym. I know I could have run outside, but it was 100 degrees out there and I would probably have died. 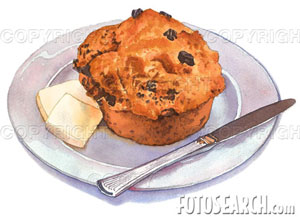 The light in the top of the Luxor pyramid (Las Vegas version) is, according to Tim the bus driver, the brightest light on Planet Earth. At 32 million candlepower, it is so bright that when the Space Shuttle passed through its beam, the light passing through their window was bright enough for them to read the newspaper. And spooky but true, in late summer, the light looks milky because it's surrounded by a huge swirling cloud of tens of thousands of moths. And what kind of moths are these, irresistibly drawn to the pyramid's light? The Sphinx moth.

There is a 1000-foot-high rollercoaster ride here that is so high that somebody at the top phoning a friend on the ground may find that the rain that is falling at 1000 feet is evaporating before it reaches their friend.

These things are strange, but is probably some of the least bizarre things about Las Vegas. Last night I went toured the Strip with a friend - I saw volcanoes erupting, ships sinking, fountains dancing, and lions prowling - just your average Monday night in Las Vegas.

The hotel where we had dinner was the MGM, the largest hotel in the world, with 5034 rooms. 10,000 people work there. I now see why the Green Valley Ranch, with a mere 500 rooms, is regarded as small fry.

And here's another strange thing about Las Vegas - you would have thought that in a city with a) such a huge power consumption, and b) so much sunshine, there would be solar panels everywhere. But I haven't seen any yet.

If New York (last week) is the gateway to America, where you can be whoever you want to be....

then Las Vegas (now) is larger than life, where cash is king...

and Los Angeles (next week) is where dreams come true in the movies... but in real life?