[Testing, testing: am trying out some new functionality - uploading video. Appreciate the technology, not the content. Tomorrow I will try to produce something more cinematically satisfying and/or relevant to the blog.]

It's not easy being an aspiring author. Here I am, one manuscript already completed (Three Peaks in Peru) and another underway and nary a book deal in sight.

OK, so I haven't exactly busted a gut putting my proposal out there - have been rather busy rowing oceans and suchlike, but it's faintly discouraging to get comments like these:

"With travel/adventure books that (unless it's Chatwin or Theroux or Bryson or whatever) or someone well-known or famous with an already-existing platform like, say, Ewan McGregor) all too often, and no offence is intended here, the book risks being a longer version of the school-days essay 'What I did on my holidays', and the book is always going
to have to fight against publishers wondering why they should care."

How many people rowed 3000 miles on their holidays, I should like to know?

Or from a freelance journalist...

"Cracknell and Fogle are writing their tome to be published by Atlantic Books on 12th October. According to my agent, the publicity is substantial and we'd have little chance of convincing a 'named' publisher to produce your version because you're not known. Apparently he's tried to flog 3 experience/adventure biogs over the last 4 months and interest has been nil. If you're not well known, it seems, forget it."

But how am I supposed to GET well-known if nobody wants to know? I thought book publishing fell within 'Creative Arts', not 'Bean-Counters Wanting a Dead Cert'. (Bitter? Moi?)

The temptation is to go for infamy and pull some ridiculous stunt to try and get noticed - Erica Roe springs to mind as somebody who gained short-lived notoriety after revealing her considerable assets to a delighted (predominantly male) crowd at Twickenham rugby ground many years ago.

But I've already streaked across an entire ocean and nobody so much as batted an eyelid.

So for now, my loyal readers, I shall have to confine my literary ambitions to this humble blog.

[For those who really need to know, here is a picture of Erica - not for the young or prudish.]

Last night at a barbeque in Baie d'Urfe, an affluent suburb of Montreal, the festivities were suddenly interrupted by a cry from one of the guests, 'Skunk!' and everybody grabbed hold of their dogs, children, etc., to prevent them chasing after the notoriously smelly critters. They release a pungent pong to deter attackers, and apparently the smell can linger on clothing, skin or fur for up to a month.

Today I went with my friend Toby and his 2-year-old daughter Anna to see some (marginally) less smelly mammals at the Ecomuseum. Coyotes, bears, lynx, wolves, owls, bald eagles, caribou, chipmunks and raccoons.

Toby is an adventure filmmaker, and we've been reviewing my Atlantic footage with a view to making a documentary and/or creating a pilot episode for a series about the Pacific bid. I've been getting some top tips on video editing techniques, and also watching Toby's videos of his adventures in Tibet, Mongolia, the Atlantic and the Sahara. I've learned a lot.

Another thing I've learned - further to last night's events, apparently the best known antidote to skunk stink is to bathe in tomato juice. I don't know who found this out, or how. If you were skunk-ed, would your first instinct be to bathe in Bloody Marys?

Sorry - no photos of skunks. Didn't want to risk contamination. It's hard enough staying vaguely fragrant in 30 degrees and high humidity anyway, without adding skunkiness into the equation. 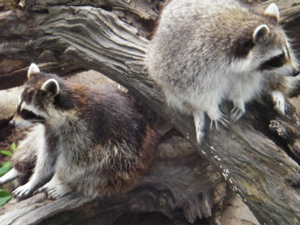 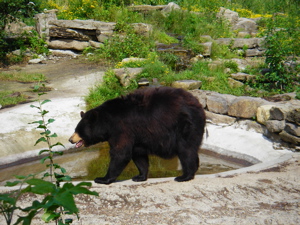