8th March
1725.01N,5945.01W,0M
Roz has crossed the Atlantic in fewer than 100 days! She has passed the magic longitude of 59 degrees 37 minutes. 135 miles to go to reach the Woodvale Race Finishing Line at Cape Shirley, Antigua.
There was a heartstopping moment this morning when those of us who check the race website found Sedna Solo totally missing. Whatever the cause she is now safely re-installed, along with the news that she has done 21 miles so far today. It is not yet 2 o'clock here so Roz still has some hours of daylight ahead of her. If she is out there on the deck rowing in this heat I feel sorry for her. I went paddling around the harbour in a kayak this morning and felt I needed to cover up as protection from the hot sunshine. I will try to add a picture to this site before I pack away the computer, but not having my own computer here, I am not too sure of how to do it satisfactorily. Apparently the last pictures that I added were rather large in number of bytes. The island is so pretty, it would be a shame if I can't do it. I am fascinated by the tiny hummingbirds, about the size of my thumb, with their shiny irridescent green bodies and swiftly moving wings.

If you were at all concerned about Roz' lack of progress over the weekend, then do take a look at the Atlantic Rowing Race website under the heading of News. Woodvale give a good explanation of what has been happening as a result of the weather.
Today Antigua is again hot and suuny, with the wind blowing in the right direction, and Roz is moving again.
Meanwhile here are a couple of pictures of the historic Nelson's Dockyard when the boat will eventually arrive. It will be a disappointment for the Island Academy if Roz does not arrive on a schoolday, as the parents have organised a rota of cars to get the children down to the harbour. Let's hope she can make it by Friday. 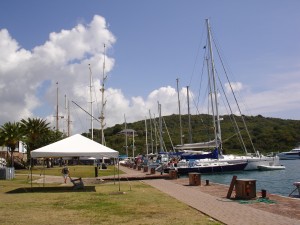 A shady spot for those who wait.

Meanwhile Roz is rapidly approaching longitude 59.37 which is the official mark for succeeding in crossing the Atlantic. The race finishing mile is more than a few miles further on yet. We await her arrival eagerly.
Meanwhile, thanks to those who are continuing to send kind messages to Roz and myself.