Roz' mother in Antarctic - just a dya visitor, not trekking to the Pole!

Q from James Oglethorpe: 'You are selected by NASA to go to Mars. Which explorers (alive or dead), would you pick as your fellow crew members? 2 women and 3 men.'

A: Well, somebody live would definitely make a more useful member of the crew! :-)

I'm going to expand this to include adventurers and travellers, partly because my knowledge of explorers is woefully inadequate, and partly because it's debatable whether it's still possible to be an explorer in the geographical sense in this day and age, when most of the earth's dry land has already been charted.

So, with all that preamble out of the way...

1,. Captain Joshua Slocum, who built his own boat and sailed it solo around the world in (I think) the late 1800's. Resourceful kind of chap, and seemed to have a good sense of humour.

2. Michael Palin (who is also coming to my hypothetical dinner party). Good team member and would probably be very good at handling any delicate negotiations if we ran into some unfriendly Martians.

4. Rosie Stancer, who has trekked solo to both Poles. I've only met Rosie once, for dinner at her house, but we got on famously. She's feisty, determined, and fun, definitely an asset to the crew.

5. Klondike Woman - I read a book recently about the female Gold Rush pioneers. I may not admire their motives, but I couldn't help being impressed by the way these doughty Victorian women hitched up their petticoats and trekked up the notorious Chilkoot Pass through appalling weather and hostile terrain, while many of their male counterparts fell by the wayside. If they could cope with that, I reckon they could cope with anything Mars could throw at them.

Have been concerned to hear about the problems other crews are having in hitting Antigua - especially sorry to hear about Row4Life losing their boat. As a solo rower in a boat that has proved vulnerable to being blown around, I could be in trouble unless the winds decide to deliver me right to Antigua's doorstep. I am in the hands of the weather gods.

The breeze had been shaping up quite nicely for about 24 hours... until this afternoon, when following a brief squall an all-too-familiar calm settled once again over my patch of the Atlantic. Lucky I'm so zen and calm about life now, or I'd be crying with frustration...

Diana Hoff (thanks for the vote of confidence - I, too, am looking forward to being your fellow solo rower!), Mariya (hola, chica! Hope the surfing in Hawaii is better than here in mid-Atlantic), Carol in Chicago (fingernails not looking good), Roger Gould, Bridget Rumley, Caroline Haines (the nutritionist and the creator of toasted Mars Bar sandwiches are, believe it or not, one and the same person!), Clarkie, Aase-Kathe and Flemming from Denmark, Tim Ratbag, Tom Moore (see you in NY), Jeff (biggest ensuite bathroom - made me smile!), John T, DB, Westie (thanks for the top tip - tempting!), HSS, AJ.

But being on a little rowboat in the middle of the Atlantic must be about the next best thing. I've been enjoying a fine sense of self-sufficiency today.

With my solar-powered watermaker droning away, my chickpeas growing in my seed sprouter, and plenty enough food to see me to Antigua, I looked around at my DIY improvements and felt, possibly for the first time, at home in the ocean environment.

I got this same feeling when I was trekking in Bolivia, knowing I had my tent, sleeping bag, and enough food for a week stowed away in my rucksack. I remember gazing into my campfire one starlit night and revelling in the feeling of having all I needed, not needing to rely on anyone else for anything.

This was one of the reasons I wanted to do a solo ocean row - the opportunity for physical self-sufficiency, and emotional self-reliance, that it offered. It's a very powerful, and very empowering, feeling.

Bliss to the buttocks

The extra padding I'd put on my seat 2 days ago wasn't really working for me. Yesterday was tolerable, but by the end of the first shift this morning my increasingly bony backside had had enough. I was also worried about losing my third and last alpaca skin seat cover, its two predecessors having been washed overboard.

So I've now fashioned a new improved seating arrangement out of my spare pillow, a piece of netting and some string. Much more comfy, and hopefully the extra airflow around the nethers should help me avoid Cracknell-bottom. 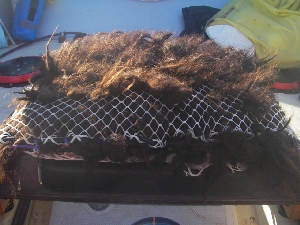 Has now acquired a hairnet

Cheerfully miserable - Clarkie, don't worry. Since I became Officially Miserable, contrary woman that I am, I've been a lot more cheerful. Since I released myself from the burden of trying to have a good time, I've relaxed a lot and am almost in danger of actually enjoying it.

Hayley Bennett - hey Hayley! Was thinking of you just yesterday and your wise words - 'you must have a very good relationship with the voices in your head'. I didn't at the start of this row, but I do now!

HHS: you star - a free massage in Antigua. I'll take that up, for sure!

My texts today had a definite international air...

Hello to CHP Consultants in Sydney!
Hello to Mat and Grace in California!
Hello to Hondo in Ohio!
Hello to Paul in South Africa!

Thanks also for texts from Caroline Haines, Karen Luscombe, Alex Burton, Henry and Elizabeth Burrows, Di Morris, Sean Chapple (good luck in Norway), Sinead Martin (has to be worth a go - easier than a sponsorship drive! One lucky dip please), Mike Dunsmore, Natalie (torturing me with memories of 16-course dinners and fantasies of toasted ice cream sandwiches!), John T (thanks for navigational tip-off).