Apparently HMS Southampton had some difficulty in locating me yesterday, despite having some of the best radar equipment money can buy.

It's not really surprising - I was perfectly camouflaged. A small silver boat on a glittering sea (as it was until shortly before they launched the RIB), hidden by huge waves.

So if anybody wants to stage an invasion of Britain, they could do worse than deploy a fleet of small silver rowing boats on a sunny day...

For the benefit of regular texters, and maybe of passing interest to others, this is how my ocean-going comms setup works, or occasionally doesn't....

If you send me a text via the Iridium website, it comes straight through to my satphone. Now when I say satphone, I want you to visualise a mobile phone circa 1990. It's big and chunky, and it's a nightmare to text from (press 1 three times to get 'c', for example). That's why I acknowledge your texts in my dispatch rather than texting back to you.

When I connect the satphone to my iPaq the phone is acting purely as a modem. My iPaq can't 'see' the satphone as your PC might 'see' an iPod or PDA. So I can't download texts from the satphone to the iPaq. If I want to keep a note of your words of wit and wisdom I have to copy them by hand into my logbook. 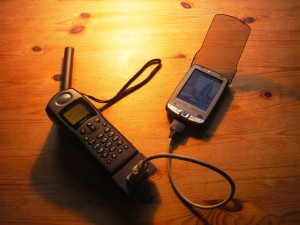 Another limitation of the satphone is that it can only hold a maximum of 29 text messages, which is why it causes me a problem if someone sends a message spread over 4 or 5 texts. I get my weather info via text and sometimes this can't get through because the satphone has hit its mailbox limit. I have to clear down the messages a couple of times a day to make sure the vital ones can get through.

So if you have a longer message, it's better if you use the Contact form on my website. This will also mean I have a permanent record of your email address, which I don't have if you text me (unless I copy it down manually, which I haven't been doing). Messages from the Contact page go to my land-based email address and my mother picks them up daily. She'll either tell me about them, or forward them on to my top secret only-my-mother-knows expedition email address.

The reason I don't give out the expedition email address to all and sundry is not because I'm getting above myself. It's because these emails come through to my iPaq via the satphone link, and this link is extremely slow and extremely expensive ($1.50/minute).

This may all sound painfully low-tech, but believe it or not this is just about as good as expedition comms get. The Iridium satphone handset isn't cheap - about £1000 - but technology-wise it's a long way behind land-based mobile phones.

Which reminds me... one final note. I think some of my friends have tried texting me on my normal mobile phone number. Errrr, it doesn't work in mid-ocean. Not too many mobile phone masts out here. I'll get those texts if/when I reach Antigua!

Summary:
Text messages
Pro - I generally get them the day you send them, unless my phone has hit its limit of 29 messages
Con - only suitable for short messages, and I have to clear down the messages daily.

Contact form
Pro - better for longer messages, and I will have a permanent record of your email address and words of wisdom
Con - my mother gets to read it first, and may or may not send it on to me, depending on content and length (definitely nothing over about 8K)

And finally, if you do send me a text, do please remember to sign it, or at least enter your email address, or I won't know who it's from!


AH: you texted me about the difference between 100% and 99.23% being a very zen concept. I need to know more - very relevant to my next project. Can you send more (via contact form, please) or refer me to further reading?


Thanks for texts and/or Valentine wishes from Molly the teddy at Southbourne Juniors (I'll get Monty back to you just as soon as I can), RJA, Julian, Celina & Barnaby Hamm, Penny, Nick, Matthew & Ben Collier, Malcolm Brookes, Sandi and the US fanclub (?!), Keith and Isabel Martin, Alasdair from Team Sevenoaks, Sarah Whittingham (you're a dark horse! Great to hear from you), John T, Jeff (I'm sure it would be the only boat in the world called 'Baboon Balls'. But I'm sure there are easier ways to become a celebrity!), Tim Ratbag (mmm, eating those yummy miles!), DB, Lizann, Ian Jackson, Rick, Margaret and Bob, Kevin, Natalie (four seasons in one day yesterday - didn't know at the start of each shift whether to wear waterproof, windproof, t-shirt, or nothing!), HSS, Steve Duffy (keep me posted!).

Rita Savage's PS: A party to welcome Roz back from her voyage is being planned for March 23rd in London. See her Home Page for details.
Incase you haven't discovered this: if you click on the pictures above you can see a larger version - much clearer- you can see Roz' smile!

It has to be the ultimate Valentine's greeting - HMS Southampton dropped by today en route from Grenada to say hello and wish me a happy Valentine's Day. They would have happily brought chocolates (and a bacon butty) as well, but unfortunately race rules forbid.

I got a text from my mother this morning: SOUTHAMPTON IMMINENT, so I was on the lookout for them and luckily I spotted them before they spotted me, giving me time to make myself decent. Thank heavens they didn't see me leaning in through my hatch, desperately trying to find some shorts, full moon on display.

Four guys came speeding over in a RIB to say hi - the first human faces I'd seen since 27th December. And what nice cheery faces they were too. They passed on greetings from my friends Rodney Byram and Jill and Colin Habgood. 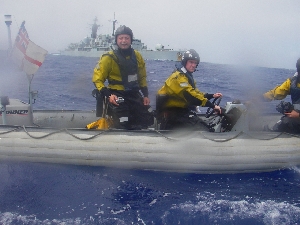 The guys pop over to wish me a Happy
Valentine's Day.

Once they'd returned to their vessel and I'd taken up my oars again, there was a magical moment - HMS Southampton steered alongside me, Her Majesty's Ship looking impressively huge, Sedna Solo looking incredibly small, and they sounded their klaxon. The men on deck waved to me and I waved back, then the great ship pointed herself east and with a roar of her engines and a gust of diesel fumes she cruised off into the distance.

Who could ask for a more special Valentine than that?

Many thanks to Rodney Byram and Cdr Mike Pearey for making it possible.

P.S. For anyone concerned about the effect on my morale/routine of this visit, fear not. Clicked straight back into schedule.


Texts: thanks to Marina (thanks for offering to send a copy of Ben and James's documentary - would love to see it. Mum's address is on my website), James O, Susan Collett (wow! There's a name from the past! Lovely to hear from you), Guy Clayton in Hamble, Pauline (thanks for the Valentines Day thought - how true!), Luke J in Dublin (next time I'm in Dublin I'll take you up on that Guinness therapy), Hugh and Paula and all the little Tebays, Sam K (phew, relief! thought you'd deserted me), M&B, Karen Luscombe, Kevin, Tom in NZ, Duncan, Tim (hope today's dispatch answered your question), Natalie (no worries! you hit nail on the head - pride and frustration two main driving forces at the moment), John T (I was on TV? - cool!), HSS, Mark Reid, George Simpson (sensible advice - am getting the hang of it now), Trish (good to hear from you at last!), Pascale and Terrence, John T (was that red rose from you?!), AJ.

Rita Savage's PS: Some more thankyous today: to the person who sent me a bouquet of flowers on Valentine's Day, nice to be thanked for looking after my own daughter. To the one who sent a single red rose addressed to Roz, but with my Leeds address: I have taken a photograph of it for Roz and told her about it. She thinks she knows who sent it! Thanks to some more people who have made donations, and/or sent messages.