No mere sheepskin seat covers for me - these are alpaca, one old, one sad, matted one and one nice fresh fluffy none.

Mark at the Craig Hospital in Colorado asked: What is the one thing you have had to do that your pubmates would give you the hardest time over if they knew?

A: It would have to be the bottom-cleaning ritual at the end of each and every rowing shift. I suppose some of the patients at your hospital have to go through some undignified procedures, but can they be as bad as this?

Someone who has done the race before described the saltwater rash he got as the worst pain he has ever known, so bad that sitting on his sheepskin seat cover felt like sitting on wire wool. I've been paranoid about avoiding the same fate. It's not easy to row if you can't sit down...

So at the end of every shift I lie on my back on my bunk with my legs in the air like a baby on a changing table, feet braced against the low cabin ceiling. I wipe my derriere with wet wipes impregnated with tea tree oil (to be recycled later as toilet paper). Then I anoint my nether regions with tea tree oil antiseptic lotion and/or Green People's Baby Salve.

I've had a few spots, but overall the regime seems to be working, so the indignity is worth it.

And now I guess my pubmates do know..

I am fed up with sideswiping waves filling the boat with water. I am fed up with cold repetitive dinners. I am fed up with having a sopping wet bunk. (The ventilation hatch above my head has been leaking like a sieve. I've now taped a cover over it, and just hope not to suffocate in my sleep in my now watertight but also airtight cabin.)

It's lovely getting texts from people admiring my courage, my tenacity, my determination. But don't put me on a pedestal - I'll only fall off. I'm just an ordinary person, and right now an extraordinarily grumpy one.

So I'm sending myself to bed early and hope to wake up in a better mood.


Texts:
Marina (glad you like the website, hope you're enjoying Antigua - say Very Well Done to Ben from me!), Martin Turner, John T (ah, to see ourselves as others see us...), Brian in HK, Tim (sedation would indeed be quite welcome right now), Wallace, Jeff, HHS (where DO you get these jokes from?!).

Rita Savage's PS: Roz has given me permission to write whatever I like about her in these messages. Before she left she did say that Monty (the teddy bear) would write a dispatch once a week, and any grumbling that had to be done would come from him. I see that she has jealously taken that privilege away from him. Poor Monty, he is just not getting much of a say about the whole business. I hope he closes his eyes when she treats her sit-upon as described above!

I've been asked if I'd been looking forward to being alone out here.

Very much so - it was a key reason for wanting to do this.

The last couple of years I've taken 2-4 weeks out each year to do a retreat - not an organised retreat, just my own thing. The best one was in a friend's cottage in Sligo, Ireland, (thank you, Catt!). I went there with a rucksack full of books and spent a month detoxing, getting fit, losing weight, and reading, reading, reading - restoring mind, body and spirit.

It's a real luxury and one of the key benefits of my weird and wonderful lifestyle that I can do this kind of thing. Most people would struggle to find so much me-time.

So for me this is wonderful - time out from being around people, a chance for me to think about who I am and who I want to be, what I'm doing with my life and what I want to do.

For the first month out here I was mostly too stressed to be in the right frame of mind, but it's coming good now. Just as well I've still got a good while left before I reach Antigua.

P.S. After I'd drafted this dispatch I suffered a dunking. I'd prepared my dinner in a thermos flask and put it in the mug-holder to rehydrate, and had just got back to the oars, when a wave caught me side-on and everything went watery for a while. When I seemed to be back in air I opened my eyes and did a quick stock take.

Self - check.
Boat - check.
Self IN boat - check.
Dinner - gone. Damn, one of my favourites too - chilli rice.
Drogues - rapidly self-deploying over the side of the boat. I grabbed the line and pulled them back in.
Para-anchor - also self-deploying. Bit trickier, this one. Compared with the drogues the para-anchor is much bigger (12 feet diameter) and has a smaller hole in the apex so it's much harder to pull back in without a tripline. I rapidly put a slipknot in the fast-unravelling line and clipped it to the boat with the first thing that came to hand - my Baltic life harness. Luckily the para-anchor hadn't got too far - about 20 feet from the boat. My dinner bobbed in the waves close to it, and I briefly considered swimming out along the line to retrieve it, but the anchor seemed a higher priority and/or I didn't fancy going for a swim in 20 foot waves.

I managed to pull the para-anchor some of the way back in. (To give you some idea of its weight, the D-ring it was shackled to is now badly bent out of shape. Impressed that the Baltic line held, as a para-anchor full of water is a heck of a lot heavier than I am.) Then, luckily, the float attached to its apex came within reach (as did dinner, but not quite close enough) and the rest was easy.

I'm not keen on these knockdowns. They remind me how vulnerable I am. Woodvale sent a text this afternoon saying 2 boats had rolled during the night, and reminding us to keep our water ballast topped up and all hatches closed. Absolutely. I'll also be wearing my custom-made Baltic life-harness from now on.

Still gutted about my chilli rice...


John: No, I am immune to flattery. What others think of me may be of interest, but only what I think of me is of importance.

Marina - your message made me laugh out loud! I'm sure a lot of girls would give their right arm for the privilege.

Keith and Issy (Chris Martin's parents), DB, Rob Hamill, Mark Reid (wheee, splat - sound of me falling off my pedestal), Kim from Denmark (promise I will take care!), Karon Philips, Karen Luscombe (made me laugh! Chin is duly up and T are O!), Mark in Northampton, Tim (photos of tea tree ritual - no way!), Victoria (looking forward to meeting you too - maybe in March?), Caroline Haines, Adamski (would love to see the painting when it's done), Steve Moore (yes, Monty is just fine), Vicki from Emsworth (how do I put sun cream on back? With great difficulty!).

Sorry to hear of problems elsewhere in the fleet, especially the Sun Latte crew. Guys, I shudder to think what you've been through. My thoughts are with you. 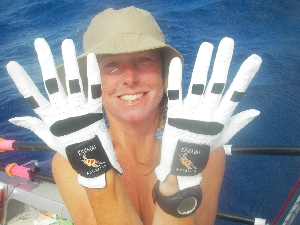 The ocean has been having some fun and games at my expense today, and the bilge pump has been busy.

The Atlantic started off in playful mood - a gust of wind blew my Fourth Element baseball hat into the water and I thought it was gone forever, but the waves kindly brought it back to me before it sank.

Then I found that Locker #7, the one with my lifejacket and emergency grab bags in it, had flooded. The Baltic lifejacket had self-inflated, as it's supposed to do when it gets wet, which was inconvenient but reassuring, I suppose.

Worse, one of my drybags hadn't lived up to its name - miraculously my handheld GPS seems to have survived its bath, but I've yet to find out if the chocolate bars have.

So still nothing too serious, but later on the mood turned nasty. Shortly after these photos were taken I was just emptying the bedpan over the side of the boat when suddenly I found myself face down in the water (at least I hope it was mostly water). The boat quickly self-righted, and I was still in it, clinging to the oar guardrail for dear life.

The deck was absolutely swamped, the footwell flooded. Luckily I've now learned my lesson, and there's nothing on deck that isn't lashed down or attached in some way. My lip salve had slipped its leash but I rescued it just before it vanished through the scuppers.

I shuddered when I thought how easily I could have gone overboard, and rowed on in chastened mood for some time before recovering my spirits.

So the sea has been in feisty mood, but mustn't complain. Conditions are good, if rough, and Antigua is getting just a little nearer. But I could do without these frequent drive-by drenchings, and as wind speeds approach 25 knots safety is paramount. If my boat and I should part company I can't count on being as fortunate as my baseball hat, and solo rowers don't get second chances.


Mark in Colorado - will answer your question tomorrow.

Message to my sister Tanya as she sets off on a one year trip around the world: Have a marvellous time. I hope your travels bring you all you wish for, and a few nice surprises too. Rx

Texts: thanks to Magnus Burbanks, Pauline, Andy & Emer (thanks for navigation tip!), HSS, Tim (row for pleasure? who knows?), John T (yes), Guy (thx for text hug), Jeff (stickers still looking good. Salty kisses? - no comment!), Candy (go for it! Good luck), Jan Meek, Steve Moore (have YOU ever tried peeing over the side on 20 foot waves? As a girl?), Bruce D (no, only chilly at night), Ian Nelson, Sal and Dick (what next? watch this space!), Jo Allen.