Today has been a very long day. 28 hours long, to be precise, because today I switched over to Antigua time.

So what did I do with my extra 4 hours? - just what lots of other people would be doing on a Sunday afternoon - a bit of DIY (If I don't do it, nobody else will!)

Today was the ideal day to cash in my bonus hours, as a small but significant list of maintenance tasks had been accumulating. And on a day when there wasn't a breath of wind nor a cloud in the sky to relieve the strength of the tropical sun, it was marginally better to spend the hottest part of the day on deck doing DIY than sweating away at the oars.

So I spent 4 hours busily bottom-scrubbing (getting rid of barnacles), replacing washers on rowing pins, padding my rowing seat, sponging out bilges, and most importantly, strengthening my oars.

The last round of oar repairs had been done in less than ideal conditions - 20 foot waves and 25 knot winds - so it was high time to improve on them. Magic Bendy Oar was today relieved of guardrail duties - it was so broken it was useless even as a guardrail - and hacksawed into pieces to make splints for Splintered Loom Oar. The timely discovery of a whole unused reel of duct tape, combined with these splints, plus the boathook, have given me much more confidence in my starboard side oar. Given that it's mostly blind faith and duck tape holding it together, this matters.

I've fashioned a new guardrail out of a length of rope, with some spare plastic piping as a cover, and a length of Mr Croker's finest oar as a stanchion. Much more satisfactory than an oar with a big bend in the middle.

So now when the stronger winds come (oh, please, lord, let them come!) I will be ready.

Note: I will leave my iPaq on GMT, so the time stamp on my dispatches will still be UK time. Also, I will now post my dispatch after my second rowing shift rather than the third, so it will still come through at around 8.30 or 9.00pm GMT.

Texts: thanks to Andy and Emer (sorry to hear about the rib - hope better soon), Rachel Smith, Margaret and Bob, John T (don't worry so much - if I want to ignore your questions, I will!), Sandi, Tim Ratbag (Milne cam through, thank you - like it!), Martin T, RHW (loved your message - thanks).

Rita Savage's PS: knowing Roz as I do, I am very impressed with her DIY ingenuity. Before she left she did say that she hoped she would be able to cope by finding practical solutions to problems. Well done, Roz!!

I had just gone out on deck for the afternoon shift when something dropped, apparently out of the sky, and landed at my feet.

'Eek', was my first thought (or words to that effect).

Then I saw it was a small but decent-sized flying fish.

'Supper', was my second thought.

I briefly toyed with the idea of throwing him back, but he'd injured himself on the inbound flight and was bleeding into the footwell. I reasoned he was a goner anyway - if I threw him back he'd soon get eaten, and if anybody was going to eat him it may as well be me.

I couldn't bear to watch his death throes, so I went to do my rowing shift and sang loudly to myself to cover the sound of the frantically flapping fish in the footwell. Eventually the sounds subsided and I braced myself for the next stage of the operation.

I've never gutted a fish before, and my knife was pathetically inadequate, but I seemed to make a reasonable job of it. There wasn't much left by the time I'd cut off his head and 'wings', but not to be deterred I tied a cord around his tail and hung him up to dry. 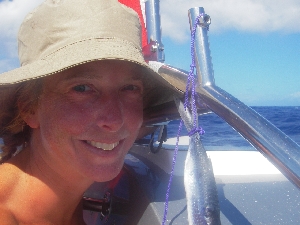 I have no idea how long you're supposed to dry a fish for. Hours? Days? But I thought if I left him overnight he'd probably get soaked in condensation and go slimy, so towards sunset I unstrung him and prepared to eat my first home-dried flying fish.

The flesh was still more like sashimi than dried, but it was a nice firm texture, tasted good although not a strong flavour, and I've suffered no adverse after-effects. And it made a nice change to eat something that didn't come out of a packet. So I can declare my first Atlantic fish supper a success.


Tiny - love getting your texts, always a cheering mixture of encouragement and sound advice, from someone who knows. Especially cheered by your opinion that I am now unlikely to join the 100 Day Club - estimable though its members are, I have no desire to be one of them. I hope to prove you right. But conditions today have been oh so still, and progress oh so slow, it is sometimes hard to believe that I will ever get there at all!

Thanks also to Rachel Haining (photos are tricky, especially when both hands have to be in picture! 2 small tripod mounts and a 5 second self timer my only aids. Good luck in Turin), John T (glad you liked the dispatch - honesty sometimes takes some courage, but would be a discourtesy to my readers to be otherwise), Caroline Haines, Jeff, Duncan (avoiding other boats while asleep? Fingers crossed and hope for the best, mostly!).

There have been many nice comments about Roz' daily dispatches. The one I like best is: "just want to say how much we are enjoying your blogs (Chris' too - funny how solos write the best ones) and wish to send best wishes and support." (R&P Stagg) Chris Martin's website is www.transatlanticforce.co.uk