To give you some idea of what it's like to be in a tippy little ocean rowing boat, try this...

1. Look at the top photo, and incline your head until the horizon appears horizontal (check out the angle of the deck). 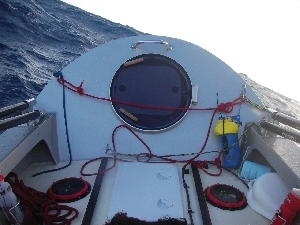 2. Look at the second photo, and again incline your head until the horizon appears horizontal.

3. Now tip your head forwards through about 45 degrees...

For added authenticity get someone to chuck a bucket of cold salty water over you at irregular intervals.

This tippiness goes on, to a greater or lesser degree, all the time - during rowing, sleeping, eating, cooking (no longer applicable since demise of camping stove), live radio interviews via satphone (occasionally necessitating great self-control to avoid swearing), boat maintenance, writing up logbook... everything. I don't mind it especially, but I think I'll be quite glad when life becomes more stationary again.


Thanks to all who have sent suggestions on how to resurrect the camping stove. Unfortunately none of them have worked so far. But my dinner of cold prawns with omelette pieces and peas wasn't too bad. I'll live.

Good news - I am on the move again. The wind has moved around to the north, so at 1pm today I dusted off the oars and started rowing. After nearly 4 days on the sea anchor, I could just about remember how.

And finally, if you're in London and you read this before you leave work, pick up a copy of the Evening Standard on the way home. Apparently there's a fair-sized article about li'l old me.

PS: Race and weather-watching:
Between December 16th and 19th, only 8 of the 26 boats made any progress forwards due to the adverse wind conditions. Boats were blown backwards towards La Gomera between 1 and 24 miles each.
By 21st December, those further south were moving again, those further north and east continued to lose ground (ocean) up to 49 miles in one case. The last 6 boats in the listings between them lost 163 miles. At last the wind is shifting and they can begin to row again.
(Rita Savage, using data from www.atlanticrowingrace.co.uk)


Wind: 20 kts from the north
Weather: wind and sun
Sea state: moderate to rough
Hours rowing: 4
Song for the day: Stuck in a Moment (U2) - like I was last week

The stove developed complications during a routine maintenance operation, due to a displaced pump cup, a missing page in the instruction manual, and a bad call on a 50/50 decision.

The result is that to get it working again I need to pull the plunger out from the pump... but the plunger is held immovably in place by a vacuum.

When things started to go awry I called on my guru for all matters concerning outdoor gear - my sister. She was able to put me onto a colleague who gave me the UK supplier's number. They very kindly offered to replace the pump if I could post it to them, but clearly this wasn't much help in the circumstances.

I strained at the pump until my eyes popped, but to no avail. I'll keep trying it on a daily basis, like a bullworker workout, in the hope that temperature fluctuations or drying out of the pump cup lubricant might release the vacuum's stranglehold. But I don't hold out much hope.

It was tough to know what spares to bring with me. Daft woman, you might be thinking, for under£100 she could have taken a spare stove with her. But then where does it stop? Spare watermaker, spare bilge pump, spare rudder, spare battery? Before you know it you've doubled your weight and your cost. Hindsight is a wonderful thing.

But not a huge problem either. Muesli, snack bars, sprouted seeds and biltong don't need cooking. Dehydrated food will be edible if left to soak for several hours, and as I reach the lower latitudes might even get quite warm if I leave it in a billycan on deck. I do have 3 or 4 of those self-heating meals stashed away somewhere if I get desperate for hot food.

At least this little drama distracted me from the fact that I've had to spend another day on the sea anchor, and it now looks set to stay that way for a while longer...

Wind: 20 kts from the south - still
Weather: wind and sun
Sea state: moderate to rough
Hours rowing: 0
Thought for the day: endure what can't be mended